Probably not how you thought this article would start, but I love tangents almost as much as I love cormorants. As many BS3’ers who commute on foot to BS1 know, there’s a stunning family of corms who love to chill by Prince Street Bridge. These majestic waterfowl are total bird babes, and I love them. I. love. them.

My husband (and our Director of Things-Aime-Doesn’t-Want-To-Do) Alex doesn’t get this joy, but I liked sending him one picture every day so that he knew exactly how many of my corm fam were chilling on any particular morning.

And so corm.watch was born. I created a new Instagram account just to share these very important observations. I also realised that this was a great opportunity to try out some classic methods for Instagram account growth to really find out which were most effective.

This takes me back to university days, and gaining my incredibly useful degree in genetics… Anyway, I’ve now shared 37 posts on corm.watch. The first 18 had hilarious* captions, no hashtags, but I did tag the location ‘Bristol Harbour’.

The second 19 had hilarious* captions, the same 15 hashtags (a mixture of made up, generic location and wildlife-specific tags) and locations. 18 were tagged at Bristol Harbour, one in London as I saw a sexy corm on my travels and it seemed criminal to not capture and share its elegance.

As pretty much every article about ‘How to be good at Instagram’ recommends, the corm-watch account stuck strictly to a theme (watching cormorants) and the pictures were all pretty much the same too, just at different ends of Prince Street Bridge.

I also followed four of other accounts, because I wanted to make sure corm.watch seemed totes legit. I went with the Bristol classics, @bristol247, @igersbristol, and @bristoltradingpost – plus a random guy called @timmah666 because the day I set up the account, @igersbristol shared one of his pictures that happened to be of my corm fam, and if that isn’t destiny then I don’t know what is.

Oh, I also followed my cousin @woodlandqueer too, because I wanted to make him feel popular. Love you Adam xxxxx

What started as a bit of a play and a way to store my cormpics actually turned up some interested results. But I just wanted to start this section with a little warning. These results are not statistically significant. My sample size (one Instagram account) is too small to say that my experience is exactly what every other account following the same method would achieve.

Instagram is a visual medium, and there are thousands of variables at play here – probably the most relevant is that corm.watch won’t appeal to everyone, and if people don’t like to see pretty much the same picture of birds every day, they were never going to engage with my account.

So I’d say pretty categorically that using hashtags, even without much thought, increases the number of likes each post receives.

I got to know who was using bots, and started to hate them

If you’ve read about Instagram as a marketing tool, you may have noticed that I’ve not mentioned the word ‘engagement’ here. Well, that’s because if this experiment has taught me anything – it’s that most of these likes were bullshit.

Sure, I had a few genuine likes (thanks Adam) but the majority, especially after adding hashtags were from accounts that were pretty obviously using automated bots to churn out fake engagement, which I’m now going to call fakegagement.

Fakegagement Instagram bots can be set up by anyone, and used to track specific hashtags, locations or demographics. Liking, following and unfollowing other accounts and posts in order to prompt a follow-back.

The annoying thing is, they can actually work pretty well and yield strong results, especially for more niche markets.

But I found myself really, really hating these crudbots and their fakegagement. It actually put me off one of my favourite fish & chip shops in Bristol – who were clearly targeting based on location – and a certain sexy industrial development just off the A4 – who are clearly following at least one of my 15 hashtags.

Nobody followed me, at least not for long.

After 37 posts, you won’t believe how many followers we have now.

Four measly extra followers. One of whom is a lovely guy from down the hallway who I basically forced to follow the account. So really it’s just 3.

In that last few weeks though, I’ve had loads of follows – so what gives?! It’s those damn bots again. These fakegagement users, in an effort to maintain a healthy follower:following ratio are unliking my account within days of liking, and missing out on some sickening corm action.

On day 15, I was stuck on a train and ran out of lives on Two Dots. So I did what no good scientist would dream of (sorry UWE Faculty of Health and Applied Sciences), and added another variable.

I opened the corm.watch Instagram feed, and started liking pictures of cormorants by other users to see if I could get an immediate response.

I did. Day 15 will forever go down in history, as the day @timmah666 followed me back.

@timmah666 just one person, I know. But that one person is THE one person who should have been following corm.watch. @timmah666 has local influence, a strong like for cormorants (as everyone should), a significant followship of over 1500, and super high engagement per post.

From a business perspective, it really demonstrates how easy it is to engage your dream customers – just interact like a real human – and get real results.

It’s a tactic I use a lot for Studio Cotton. I make sure our dream clients know how much we love them and their work, so that when they need a marketing service, they remember that lovely little marketing agency that always takes the time to let them know how much they appreciate their work.

Until this point, the highest number of corms observed was 5. The highest number I could find via anyone’s Instagram was 7. I saw saw mother-flipping 8 corms. I still get shivers thinking about that moment.

I remember that day like it was yesterday. I walked the river-side of M Shed instead of via Cargo 2, my usual route. I spotted my corm fam out for a swim, and thought “oh gosh darn it, if they’re out here then they won’t be by Prince Street Bridge for their photo opportunity”.

But I was so wrong. At Prince Street Bridge, my corms were waiting. But some were still swimming. There were so many! I waited patiently, looking like a loon to the gentleman working in the crepe cabin, and finally managed to capture all 8 in a single picture (ok, two pictures).

As you can imagine, shit went cray. Well, cray for an account with fewer than 15 followers. My Instagram bae @timmah666 left his first comment, tagging another corm-loving friend and gaining me a new follower in @leilaa81.

Oh yeah, I guess that means all the hashtags only really gained corm.watch 2 followers then…

The lovely @leilaa81 then tagged us in a story as she tried to catch up with the full corm fam.

Day 25 was the first day of proper, exciting engagement. And it was because the content (a picture OF EIGHT MOTHER FLIPPING CORMORANTS) was so good – no tricks, not tags, no outgoing engagement – just a really great tale.

My video didn’t do anything.

Damn you, storm Eleanor. After the Christmas break, I had a couple of heart-breaking corm-free days. I blame that b*tch Eleanor. The harbour was choppy, the weather unkind, and the cormorants were absent.

I wanted to communicate the trying conditions to my loyal following, so switched to video for a single post on day 35. That post achieved the second-lowest number of likes for any hashtagged pic (thankfully I still had @timmah666 on my side), but most articles bang on about video having the highest levels on engagement.

Well, this one didn’t.

It wasn’t a great video, and it was just one post. But it did demonstrate that hypothesis moving pictures > still pictures is not strictly accurate.

I learned a lot about cormorants

Apparently, posting 37 pictures of the same subject makes you even more obsessed with said subject. The lovely guy from down the hall, @csbbettles taught me that when corms are hanging out with their wings spreads, it’s because they’re drying out.

These gifts of nature ain’t even waterproof!

I also received some lovely cormorant-themed presents for Christmas, which I can imagine was super easy to find for my lovely husband.

I’m ending this nearly-1900-word essay with something I almost re-learned as an Instagram follower, not followee.

I don’t know if you’ve caught on to this after reading the last 1600 words, but I’ve become a little bit in love with mysterious @timmah666. Let’s just be clear – this is very much an Instagram love affair.

As I only follow 6 other profiles, it meant that every time I logged in, I got to see genuinely great pictures, and read lovely insightful posts from someone I found interesting. And that’s exactly what Instagram should be for.

I’m not 100% sure what to take from this (as someone who runs an Instagram account for their own brand). I guess it’s to go back to basics, share only content you believe in, keep the quality high and stay relevant.

I’m also going to go through the profiles Studio Cotton follows and unfollow the ones that just don’t do it for me, so that I can find real inspiration. And fall in love with more accounts like @timmah666.

For the teal deers out there:

*your definition of hilarious maybe different to mine. I still think I’m hilarious.

Loved this article? Say with a pin!

A lovely Bristolian marketing agency for creative indie brands in the UK.

Enjoy the latest from Studio Cotton

PrevPreviousWhy Linktree is bad for SEO (and an alternative for your website)
NextFree Stock Photo Packs: GenevaNext 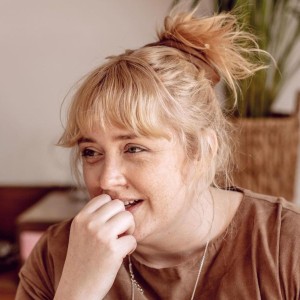 Founder of Studio Cotton, Aime has over a decade of experience in branding, websites and marketing. Passionate about small business life, cats and house plants.